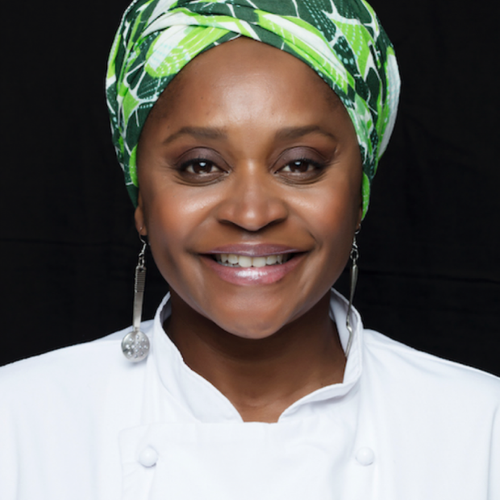 Talks covered by this speaker

Mokgadi Itsweng has worked in the food industry for more than 17yrs. A self taught chef, in 2000 she acquired further culinary training in New York City at Peter Kump cooking school and the New School, and upon her return to SA, Woolworth’s snatched her up and she worked as a food works chef.

In 2006 she opened a restaurant, Lotsha Kitchen and Cocktails, transforming simple African flavours into celebrated restaurant food. She is Creative Director and head chef for Lotsha Home foods and Ujuspice, both developing food products based on African ingredients.

She has been featured on TV, developed recipes for magazines (Oprah Magazine SA, Food & home, House & Garden) and is an award-winning food writer. She was included in “the Great South African Cookbook” as a food thought leader, with her debut cookbook Veggielicious, a plant-based ode to the garden published by Human Rousseau, launching in September 2021.

As a chef she was selected to represent South African cuisine at the 2010 World Economic Forum, as well as food festivals in Taormina, Italy. She is a food activist and part of “The Chef’s Manifesto”, a global movement of chefs championing efforts to end world hunger. She is currently studying Food and Sustainability at the European Institute for Innovation and Sustainability.

Your logo could go here!

If you'd like to get your brand in front of attendees following the categories this speaker is talking about (on this page, via email and during each talk) contact us.

We use cookies This website (and some of its third-party tools) use cookies. These are important as they allow us to deliver an exceptional experience whilst browsing the site.

By clicking 'Accept', you agree to the use of cookies. To learn more see our Privacy Statement.